Defining The Plot and Researching the Book Made All The Difference 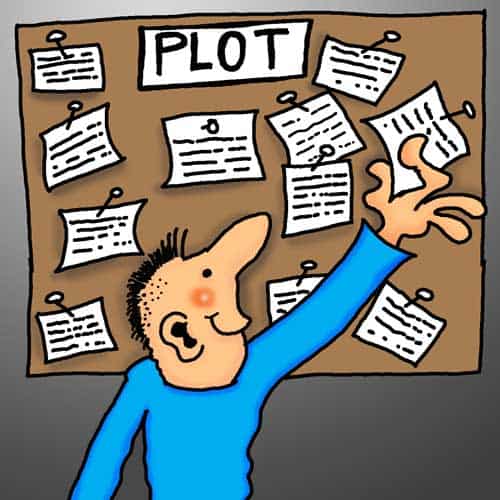 Defining the plot was not important in the past as I have always jumped straight into writing mode with only a scratchy idea of what the book is going to be about.  I may have just had a character with a vague idea for the storyline or a scene in my head that could be developed and worked into a book.

This is all fine and dandy but often caused immense problems further down the line.  Some authors seem to be able to throw themselves into a new book without too much forethought.  That’s what I thought I would be able to do!!!

I like the idea of writing and not knowing how things are going to evolve until I get there.  The same as reading books.  It’s the thrill of discovering what comes next.  The twists and turns, surprises and ‘well I didn’t see that coming’ that keeps me glued to a good story.

For me, I love letting my mind run riot, exploring every avenue to carry the story forward.  The problem is the amount of time that I waste.  When I get bogged down with research and plotline it starts to get sketchy and the ideas don’t unfold naturally.

Scrivener keeps me on track with the writing process

With this first solo book I have mapped it out using the corkboard feature in Scrivener. I have recently discovered this fantastic writers software that allows you to have all your notes, research, reference points and the written draft on one screen.  Instead of scratching around for a web site I saw a week ago,  I can now import every web site any image of document into scrivener so they are always at my fingertips. There is also a feature where you can split the screen with the book text in one half and the research (such as a web page) in the other. Trust me – it’s brilliant and I am so glad I listen to The Creative Penn Podcast by author Joanna Penn who recommended Scrivener.

The mapping out of the complete book was done in the corkboard section and  gave me the structure and outline.  This took very little time to put together and although I am amending the story quite a lot as I progress, this cork board plot has proved to be such an improvement to previous haphazard effort. 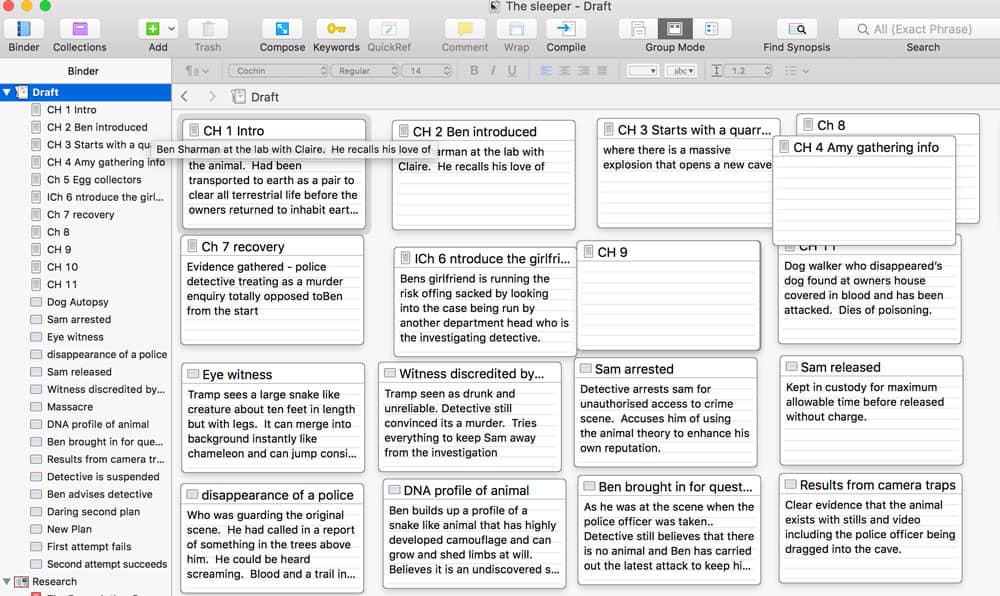 Cork Board for a great visual map of the plot

Here is the corkboard in the very early stages of the current book I am working on.  It has changed a lot since I took this screenshot but it will give you the idea of what you can do to have a great visual plot of the storyline. It’s a bit of a jumble but demonstrates clearly that you can move ideas and chapters around at will and reorganize the whole book (which is a pain in the neck to do in other programs such as Word.)

The corkboard is fully editable with drag and drop to suit whatever whim crosses your mind.  The above example looks a bit untidy (an understatement!) but is really helpful in getting me on track and demonstrates, clearly that you can move ideas and chapters around at will and organize the whole book (which is a pain in the neck to do in other programs such as Word.)

No longer losing the plot!

The transition from haphazard to organized has made one hell of a difference.  I also prepared as much research as possible and you can add web sites, pdf’s video, images and your own notes into the reference section (you can just see a bit of it bottom left above).

The net result of a plot outline and pre referencing is a  more creative experience.  It is no longer stop-start and as I have the basic plot i am not searching for storyline I am creating the story much faster and seem to get far more done than I ever did before.

Will this definitely work for you?  Only you can find that out.  we are all different writers and have different skill sets.  I thought i could just make it up as I went along and i could.  But i have found the quality, quantity and speed of my writing has really ramped up using this method.

How to Overcome Writers Block – Fact or Fiction? Sidetracked with short stories – serendipity