I am on the third book in quick succession this year.  It is going to be the first of a new sci-fi series which I intend to produce a book a month for.  The books will be short in length at around 30,000 words per book.

The series is centred around the main character U-SAM a young, beautiful high flyer in the Academy who falls foul of a Pirate attack on her ship.  The story sees her teaming up with other travellers who are set to be sold as slaves for distant mining corporations.  The group form a crew of the new ship the Apollo Explorer…I will leave it at that…not to slip anyone a spoiler! 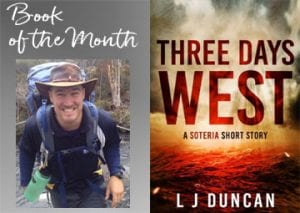 Each book in the Sci-fi series will be a complete adventure and more or less each chapter will have a complete story within the main adventure.  I am aiming for an enjoyable sci-fi adventure, fast-paced read that can be consumed in small or large chunks on a tablet, Kindle or stood on the tube on your phone!

I really want to motor on with this series to get the first drafts in quick succession with a target of producing a book every fortnight.  Here is the progress of the first in the U-SAM series ‘Apollo Explorer’:

I have modified my approach yey again and before I started writing I mapped out every chapter from start to finish with a couple of lines for each.  The rest was straight out of my head.  I have found this a much easier framework and think this will be the way I will write in the future.  On my previous two books, I was averaging around 1200 words a day.  You can immediately see the difference using a totally planned approach – over double.

This has been the most enjoyable week I have had writing this year.  Taking the story away from planet earth removes many constraints away –  mainly in the amount of research I have to do.  And! – I can make a lot of stuff up as it mostly doesn’t really exist!  Loving this first in my new Sci-fi series and I think people will enjoy it too!

Great progress – finished to the first draft.  Very pleased with the result.  Characters work well and the storyline and action appear to gel well. 25,800 short of my initial target of 30,000 words but I believe the story length for this first book is right.

This has been a real eye-opener and I think this is the way to go.  Next step, now that I have a good feel for the characters is to go back and create the prequel – the very start pf the protagonist’s journey into space travel!

I have started the prequel to the series on Thursday 23rd July from her first day at the Moonbase academy and it doesn’t start well for her and gets worse!  The prequel is going to be ‘perma-free’ as soon as I get it totally finished with a cover and will be available to download via book Funnel tin all formats.  This will be a short story charting U-SAM’s early years as a member of the Federation.

I am aiming for 10,000 words minimum and anticipate a short story of between 10-15,000 – just depends on how it goes.  I have plotted the whole story out but have already deviated away from the planned framework as I got carried further out into space!

It came back very quickly as she was able to fit me in straight away and after going through the editing notes I could see there were sections that needed more work in terms of improving certain characters.

The first draft is finished and editing is still in progress.  I am focussing on this to make sure I can use the prequel to give away and boost my author email list.

After the first edit by my editor, the main feedback was the emotional impact of the characters.  basically the story was fine but I needed to make readers buy into each character more.  After rewriting and augmenting many sections I sent it back to her with fingers crossed.

I received the second edit back from my editor today (Sunday 9th August) and was delighted to find that she gave it the thumbs up, with just a few punctuation issues (which I am particularly useless at picking out!).  The word count has risen to 14,800 which is another 2,500 on the first draft.

I have imported the file into Vellum and it is looking good to go, just waiting for the cover to come back from the designer.

I know how it starts and know how it ends and spent half the first day planning the meat in the sandwich.  I am looking at around 25 – 30,000 novella-length again and am aiming to complete this in around ten days tops.  After spending quite a lot of time on the editing process for the prequel I need to get this and book 3 completed so that I have plenty of editing time.

This has been another enjoyable week Setting the story up in the first few chapters.  After some great advice on character emotion from my lovely editor, I have one ’emotional’ eye on each of the characters in the plot, which will hopefully reduce the editing.

Pretty good going all things considered as I have not had much time to write.  I have been working flat out on revising the first book and doing several self-edits as my editor offered me a slot this week.  No brainer!  I have also received the first draft of the prequel cover which looks superb!

The Experiment – A Free Sci-Fi Thriller Short Story Should I type or have another beer?