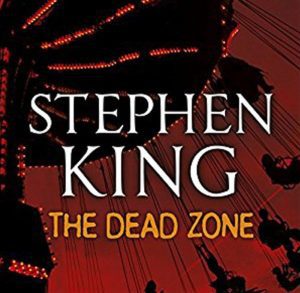 I really enjoyed listening to Stephen King’s The Dead Zone audio book. This is a science fiction thriller set mainly in the 1970s.  It’s quite a hefty listen/read at 16 hours, 13 minutes or 530 pages, but it didn’t seem that long as it was so good!

I haven’t seen the film made in 1983 with Christopher Walken in the lead role, so I didn’t have a clue what to expect. Without spoiling – it centers on Johnny Smith, who becomes clairvoyant after a life-changing accident and makes astonishing predictions by touching people and objects.

It is a great story from start to finish. Romance, suspense, horror (as you would expect from the pen of the horror king), twists and turns keeping you totally gripped throughout with great sub plots and characters. King really excels himself in this, one of his earlier books, as he draws you into the mind of the protagonist, who has to overcome extreme medical, mental and paranormal trauma.

He is one of the few writers that can keep my attention and total focus on the storyline, making me want to read on. A great skill which Stephen King possesses in spades.

I have read a few of his books now and this was the most emotional rollercoaster of all so far and the most enjoyable read.

For those of you who are put off by the thought that his books are all horror and gore – try one as you may find the fabulous story telling outweighs any element of horror that he injects into his books. I would recommend The Dead Zone as the perfect introduction into the world of Stephen King.

Unlike some of his other books such as Needful Things (1991), which has a being that is devilish in appearance, it does not go too far off the path of reality and in many aspects, is on a par with actual recorded clairvoyant incidents. Okay, I exaggerate slightly as Mr. King has taken Johnny Smith’s psychic ability to Nostradamus level, but it is still a fabulous read.