“Everyone says that the eyes in certain paintings follow you around the room,” said the teacher trying to enthuse some interest in her class, who looked thoroughly bored. 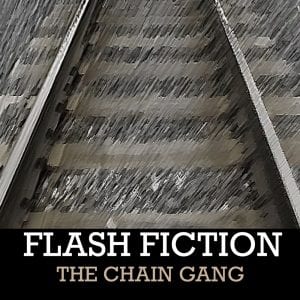 The museum guide who had been listening winked at the teacher. “May I?”

“Please do,” said the teacher, who had run out of ideas to keep the class entertained.

“What your teacher says is very true. But we have a very special painting in the Clarke Collection room that I think will amaze you.” A few children looked up at her. “Come this way.”

Like the Pied Piper, the class of sixth graders followed in a line, snaking past Gainsborough’s, Raphael’s and a Picasso. In a small gallery at the back of the museum was a collection of brightly coloured canvasses by William E. Clarke.

“I can’t say I have heard of the artist,” said the teacher.”

“Not many have but I think you will agree; his work is exceptional.”

The children looked at the paintings but soon lost interest, apart from one little boy who stood staring at the smallest painting in the room.

“You have found it,” said the guide.

“Pardon,” said Tommy Wilson, staring up at the scene of a chain gang of convicts having lunch by a railway track they were building.

“You have found the amazing picture. It is said that if you stare at it for long enough the figures in the painting move.

“I don’t see nothing moving,” said Clancy Jade, pouting at the guide.

“Yeah, right,” said Clancy, pushing Tommy in the back.

“I can,” he protested, still staring up.

“Must be those stupid glasses of yours, four-eyes,” she said, prodding him in the back again.

“Okay, children, we have to move on,” said the teacher before the squabble got out of hand. “All say thank you to the nice lady.”

They showed their appreciation as the teacher steered them towards the exit.

It was forty years later when the same painting made the news headlines. There had been a break-in at the museum and the twenty-inch square canvas had vanished in the raid. The mysterious disappearance of the painting, estimated to be worth over six million dollars, had the police baffled. After extensive investigations into art dealers and known art traffickers, there were no clues to its whereabouts and slowly the case attracted less interest and police attention.

Six months passed and Detective George Anderson, who was on the team investigating the theft, had a phone call.

“This is Officer Derek Rogers, NYPD. We are investigating a missing person enquiry and after visiting the home, the man’s wife showed us around. I am sending you a photo now.”

George’s mobile pinged. He was looking at The Chain Gang by William E. Clarke. Was it the missing painting or a print? There had been a single limited-edition run of fifty signed prints of The Chain Gang. He assumed it was one of the fifty.

“Officer Rogers, can you go up to the painting and take more close-up photos all along the bottom of the picture.”

‘Do you want me to Facetime you instead?”

As the images came back George’s heart began to race. It did not have any limited-edition markings.

“Don’t touch a thing. I will be right over.”

The penthouse suite on 10th Avenue took George Anderson’s breath away. Not so much the opulence and location but the number of original pieces of artwork on display.

“My husband is especially fond of the impressionists. We have a few originals from that era. Do you like art, Mr Anderson?”

“I do indeed. Did you say originals?”

“Yes. My husband will only hang original artwork.”

“You have a painting by William E. Clarke? May I see it?”

“Of course. But why? Wouldn’t you rather look at the Monet or the Goya?”

She ushered him into a small room. There was nothing in the room except for the single canvas.

“This was his favourite. He said it was special. I think it’s damned creepy,” she said

George examined the painting closely. “Do you know where your husband acquired this from?”

“No, sorry, I never go with him to the auctioneers. I can’t travel. Most purchases are made through online dealers and auctions, but he does like to go, especially if it is a rare painting. Many of them require a plane journey and I could never get on a plane. Could you tell me what this is all about? I thought you were here to help me find him. He’s been missing for over six months and your police department don’t seem to be doing anything.”

George glanced across at Derek Rogers.

“You can safely say that we will throw everything at the search for your husband. I am afraid that I will need to take this painting as I have reason to believe it was stolen.”

She removed her thick glasses and looked him in the eye. “Are you suggesting that Thomas stole this?”

“I am not suggesting anything. All I am saying is that if this painting is the original, it has been stolen. You said that your husband only hangs originals?”

“The search for your husband will continue, but I need to investigate this painting further and I will need to take any computer equipment and mobile phones your husband owns. Did he take his mobile phone with him?”

“We took the laptop to examine when we first investigated his disappearance six months ago,” said Derek Rogers. “We returned it after finding no leads. We also examined the records for the mobile. The last call was to an unknown number on sixteenth August.”

“The day after the painting was stolen,” said George.

“Yes, but we weren’t investigating a robbery, we were looking for a missing person.”

The painting was back in its rightful place the next day and for the second time in six months, it made the news headlines.

The press crowded into the Clarke Collection room.

“Detective Anderson, do you assume that the missing suspect is dead?” said a reporter.

“We are assuming nothing.”

“You mean you haven’t got any idea where he might be?”

“The investigation is ongoing, and we will update you with developments. Thank you, ladies and gentlemen.”

The frenzy was over and during the next couple of weeks the queues to see the painting died down until normality was restored.

Clancy Leibowitz wandered behind her daughter Clara. She exhaled loud enough to be heard by everyone in the room.

“Mother, can you just look as if you are interested even if you’re not. I have a huge project to be in next week and I need to focus. If you don’t want to walk around with me, go do some shopping and I’ll meet you somewhere.”

“Sorry. I just hate these places.”

They entered the Clarke Collection room. Clancy felt a cold tingle run up her neck.

“I’ve been here before,” she said, fixated by the small painting at the other end of the room, where an attendant was talking to a small child.

“It’s a magic painting. If you stare at it for long enough the figures are said to move.”

“Wow, you’re right. One of them just moved.”

The attendant laughed. Which one?”

But the little boy ran off to tell his mother.

Clancy stepped up to the painting.

“I remember seeing this painting when I was about the same age as that kid that just scarpered. It’s a great way to get kids interested but it didn’t fool me even back then.”

“It is supposed to be true. So many people say they have seen some of the ten convicts in the painting appear to turn to each other as if they were chatting. I never have but it makes a good talking point.”

“Wasn’t this the painting that was stolen?”

“Yes, and they still haven’t caught the thief.”

“No, this was one of his earlier pieces painted in eighteen ninety-four.”

“He must have been a visionary then.”

“The convict on the far right is holding a mobile phone and by the way, there are eleven convicts, not ten.”

The attendant shook her head and counted them out loud. When she got to ten and there was still another convict to count she fell silent, mouth wide open.

Clancy put her glasses on and leaned forward to look at the convict on the far right.