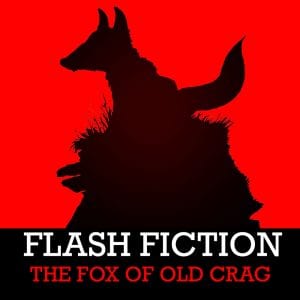 The Boxing Day hunt gathered outside the Stags Head Inn and the hunters drank stirrup cups, toasting one another’s health and good hunting as they had done for three hundred years.

The fox watched from the brow of Old Crag, the highest point overlooking the village. He surveyed the fine livery, the scarlet red tunics and the beautifully turned out steeds with utter contempt.

These men and women had blighted his family with several hunts a year. Ransacking the countryside, killing and maiming wildlife in the name of sport. Sport indeed. There was no sport in chasing a weak or young fox. Terrifying it, cutting it down and ripping it to pieces in the name of sport.

They would have no sport today. He had moved his family well away from the traditional Boxing Day route, such was the predictable folly of tradition for these stupid creatures of habit.

The horns sounded. Let the bloodlust begin. The fox had a glint in its emerald green eye, as it sloped down the hill at the back of Old Crag. There would be blood spilt today but it would not belong to a fox.

Jason Smith watched his father lead the hunt from the Stags Head to the common and once off the cobbled street they galloped across the open meadow, hounds baying and horns piercing the fog-laden air. He wished he was with them.

Wished he was riding next to his father, leading the hounds across the farmland surrounding the village. He had another two years to wait before he was allowed to become a member of the hunt. It would be the longest two years of his life.

He ran through the alleyway running across the back of the bowls club, over a stile and diagonally through a large field of black-faced sheep. He knew exactly the place he could watch the hunt in full flight. Watch the riders clearing the high hazel hedges another three fields over, just before the washbrook

He darted between shadows of sheep and hurtled across the wet grass, the mist growing thicker as the washbrook grew nearer, then over a five-bar gate and across a muddy field that had held wheat during the summer. He could hear the hunting horns in the distance and wondered if they had picked up the trail of a fox yet.

The next field took longer to negotiate, being riddled with molehills. He cursed the velvet-snouted burrowers as he fell and broke his fall on the remnants of a huge thistle. Spikes tore into the palms of both hands sending searing pain up each arm. But he didn’t waver, as painful as it was. He had to reach the beech hedges on the other side of the field.

Jason slowed to a trot as the mist was dense from the relatively warm water of the washbrook meeting the freezing December air. The brook looked like a steaming bath with a cloak of mist rising from its surface. As inviting as it looked he knew the water was icy cold and deceptively deep for such a narrow brook.

A few more steps and he would reach the hazel hedgerow where he would have a grandstand view of the horses leaping over his head. Out of the grey loomed the hedgerow. Black as death, still and silent. Not so much as a whisper in the air. Mist clinging to Jason’s skin like thin wet leather.

He found a spot under the hedge in a vast tangle of roots where he would be safe from horses’ hooves as they thundered through the hazel. It was cold and damp and the prodding icy fingers of the roots surrounding him made it highly uncomfortable. His heart pounded. The hounds were drawing nearer. He could hear their baying and yelps but could not yet hear the pounding of hooves.

He blew into his hands and stared directly ahead until something in the corner of his eye caught his attention. A shadow in the mist appeared from nowhere, further along the hedge. It drew nearer. It was an animal. A small sheep? Why he hadn’t seen it approach was a mystery.

A rush of air set the mist swirling for a second, revealing a pair of green eyes. He sat perplexed as the fox walked towards him, stepping out of the mist to reveal its stunning red coat. The fox approached through the tangle of roots and sat not six feet away, still with its emerald eyes fixed upon him.

Jason considered the fox. They were supposed to be clever and wily. Was this fox deliberately going to outwit the hunt or was this just a sheer coincidence? His father would sail straight over the fox and be gone without being noticed. The hounds would wade through the brook and not catch its scent. The whole hunt would crash through the hedgerow totally unaware of their quarry directly below them. Or, would it make a move as they grew nearer?

The baying of hounds grew closer and Jason could begin to hear the horses pounding the turf through the meadow, just a few hundred yards the other side of the hazel. He looked back at the fox. He could swear it was smiling. But that was just absurd. Foxes didn’t smile. But the fox did look as if it had a knowing grin on its face. A look of anticipation and mirth. An intelligent smile. Its ears moved independently listening to the approaching pack of horse and hound, but its eyes were locked on Jason.

The hooves approached the beech hedge and the fox made its move, running at Jason, lips curled back, exposing brilliant white fangs. It made no noise, but the vicious look was enough to get him to his feet. He looked for a stick, but the fox ran forward and dived for his ankles.

Jason instinctively leapt forward and felt nothing as the chest of the lead horse hit him in the back, bringing the horse down and dismounting the rider. The fox watched the rest of the hunt charge over the hedge. Complete carnage, as another three horses ploughed into the fallen horse and rider. Satisfied, the fox vanished into the mist.

It was a wet January morning with only the single mournful bell of the chapel breaking the gentle pattering of rain. The fox looked down from the brow of the old crag at the hearses entering the graveyard. He felt no pleasure from the grief below as two coffins were lowered into the sodden ground. He turned and sloped down the back of the crag to meet his family, safe and warm below the ground, in their den beneath the hazel hedge.